The next time I'm tempted to curse life because I missed a three-footer, I'm going to thank Bob Labbance for helping me keep it all in perspective. This golfer, author of 16 golf books, and rabid NY Yankees fan is keeping his sense of humor as ALS--Lou Gehrig's disease--breaks down his body.

Bob's golf days may be over, but his life isn't. He's still showing up for book signings, making plans to get to Yankee Stadium, and cherishing every moment he gets to spend with his wife Kathie, son Griffin, and daughter Simone. He's also set up a scholarship fund to help his children go to college.

Read Bob's inspiring story as told by Ralph Wimbish in the NY Post.

And keep it in mind next time you slice one out of bounds and start crying about the cruelty of the golf gods.

Dave Donelson, author of Heart of Diamonds a romantic thriller about blood diamonds in the Congo
Posted by Dave Donelson at 6:42 AM No comments:

Watching Boo Weekly win the Verizon Heritage at Harbour Town on Hilton Head brought back images of a memorable shot I hit there. That's one of the great things about the game--your best shots stay in your memory the way a good 18-year-old single malt lingers on the back of your throat.

I was playing with Beau and Dick, boon companions with whom I've teed it up since balata was the peak of golf technology, which is a long, long time. This trip wasn't quite that long ago, but it wasn't yesterday, either. I think Bush The First may have been in office, but I'm not exactly sure. It's funny, I can remember the shot I hit that day, but not who was President of the United States.

A storm threatened before the round began, but it wasn't raining, so we were going to play and hope for the best. It was very foggy on the practice range. I remember because Beau was warming up with brand new irons when the head of his five iron snapped off the graphite shaft and disappeared into the fog. Amid many jibes about his prodigious strength and how he should try to hit the ball instead of the ground two inches below it, he trotted out onto the range, found the club head, and took it to the pro shop for repair. That wasn't going to happen before our tee time, so Beau played with a loaner--complaining about it the entire round, of course.

The wind off Calibogue Sound was vicious, which played havoc with my erratic game that day. The teeny-tiny Harbour Town greens--the smallest on the PGA tour--were particularly unhittable for me and my score showed it. I don't recall the exact number on any given hole, but when I reached the 18th tee, I needed no worse than a bogey to break 100. I was not having a positive golf score experience.

Having given up all hope, I stepped up to the final tee shot totally relaxed. In other words, I didn't give a damn anymore. The wind roared directly into my face from somewhere behind the candy-striped lighthouse behind the green 478 yards away. Not caring, I swung loose--very loose--and hit the ball on the dime-size sweet spot on my Spaulding Executive driver. (That kind of dates the story, doesn't it?)

The ball took off low and boring into the wind, ending up in the center of the fairway next to a sprinkler head that said I had bombed it 279 yards into the wind. I find it mystifying that I can remember the exact yardage of my drive, but not who was the leader of the free world that day.

Yes, I broke 100, even though I sailed my second shot over the green in a paroxysm of adrenaline compounded by severe over-clubbing. A 99 is nothing to brag about, but I'll never forget that drive.

The other thing I remember is the Christmas present I sent to Dick and Beau that year: a ceramic beer stein picturing the 18th hole at Harbour Town. On it, I used a read Sharpie to draw a star where my drive landed.

Dave Donelson, author of Heart of Diamonds a romantic thriller about blood diamonds in the Congo
Posted by Dave Donelson at 6:20 AM No comments:

Even die-hard worshipers at the shrine of Augusta National will never watch the Master's the same way again once they've read Toonamint of Champions, a hilarious send-up of the hallowed event written by Georgia golf writer Todd Sentell.

Sentell puts a cast of outrageous characters both inside and outside the sacred grounds where golf's elite meet each spring to celebrate the game. Playing a round at Augusta is every golfer's fondest dream--and one that will never, ever come true for 99.99999% of us. But Sentell's Waymon Poodle, a daydreamer from Mullet Luv, Georgia, manages the feat in a way that defies description in a family golf blog.

Toonamint of Champions is the perfect read for Master's weekend. I suggest you don't try to multi-task and read it while you're waiting for Zach Johnson to line up his putts on TV, though. You just might end up laughing so hard you'll miss the winning stroke.

Dave Donelson, author of Heart of Diamonds a romantic thriller about blood diamonds in the Congo
Posted by Dave Donelson at 2:25 PM No comments:

Playing golf with off-the-rack clubs is akin to chewing a steak with store-bought teeth. You can do it, but the experience is far from optimal. Fortunately, just as there are plenty of specialists to properly fit new choppers to your mouth, there are numerous places in Westchester to get measured for perfectly fit golf clubs.

There are three basic ways to go. One is to a golf retailer, where a salesperson will use several devices to make sure the sticks you buy match the peculiarities of your swing the way a tailor will match your 30-inch inseam to your 42-inch waist. The second is to the golf club pro shop, where a PGA professional will lend his or her considerable expertise to the process. The last is to a club fitting service, where the technician will measure most of the moving and some of the non-moving parts of your golf swing, your anatomy, and maybe even your psyche. They use radar, lasers, ultra-high-speed cameras, strobe lights—you name it, they measure it. Then they feed it into their computer and come back with a profile of what happens when you swing a club at a golf ball.

My first experience with high-tech club fitting was with Rick DeMane, a third-generation golf technologist located in Greenwich, CT. It was fascinating to hit the ball in his studio surrounded by mysterious gizmos, then take a peek at the instantaneous feedback that explained in excruciating computerized detail why my last swing looked like something spectators should wear helmets to watch. After I tried out several drivers, he modified a couple of promising ones to my specs that I then took to the driving range. While the results aren’t Tigeresque, I came away with a club that pounds the ball a respectable distance and even hits the fairway (slightly) more often than not.

It's hard to tell if the results came from increased confidence or the technologically correct implement in my hands, but I've been pretty happy with it either way.

Dave Donelson, author of Heart of Diamonds a romantic thriller about blood diamonds in the Congo
Posted by Dave Donelson at 6:42 PM No comments: 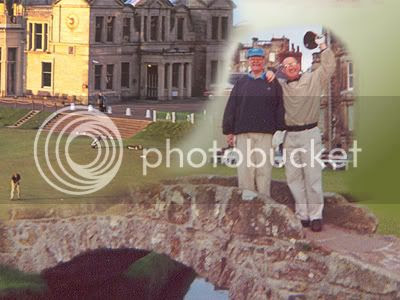 Beau and Dave on the Swilcan Bridge, 2001

It's not an April Fool's Day gag. The traditional season opening event at St Andrews Links is a weekend when the Old Course is played backwards for three days.

During the Old Course in Reverse event, golfers get to play the Old Course on its original clockwise routing starting from the first tee and playing to the 17th green, then the 18th tee to the 16th green and so on.

Until the 1970s the course was set up in the clockwise direction for four weeks in the winter. St Andrews Links Trust, which manages and maintains the seven public courses in St Andrews including the Old Course and the Course, recently revived this routing and it has proved popular as a season-opening event.

Posted by Dave Donelson at 6:48 AM No comments: