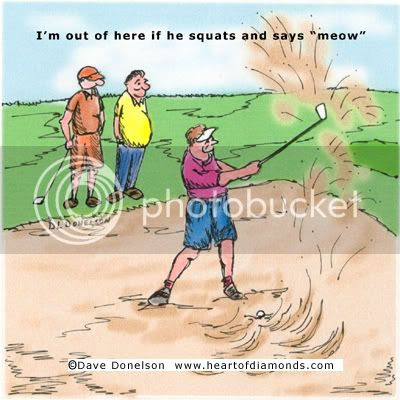 Dave Donelson, author of Heart of Diamonds a romantic thriller about blood diamonds in the Congo
Posted by Dave Donelson at 3:43 PM No comments: 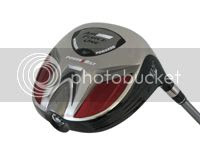 Here's some new golf technology for you: PowerBilt is filling the head of a golf club with nitrogen gas. NO, it doesn't sound like a Whoopee Cushion when you hit it and NO it doesn't explode--although the company says the idea is to get explosive power off the tee.

Just in case you miss the point, the line is called "Air Force One."

PowerBilt says that by filling the head of a driver, fairway wood, or hybrid with nitrogen gas, it can offer clubs with multiple face thicknesses, thus allowing all golfers to flex the face the way pros do.

The compressed nitrogen, which is pumped in to a pressure of 150 psi, supports the face with no mechanical bracing. There is a face thickness for big hitters and one for golfers with a more-controlled swing in the line. The face of any good driver flexes when it hits a golf ball, producing what is often referred to as the “trampoline” effect. The thinner the face, the more it flexes, although there is a point beyond which the USGA police can arrest you for using a club that's "non-conforming."

I tried the technology out at Chelsea Piers in New York and was suitably impressed. It may have been my imagination, but I swear I could feel the club face flex when I hit one on the screws. That didn't happen often due to operator error, but when it did the results were as advertised--long and straight. I particularly liked the three-wood, probably because the shaft on the demo drivers was a standard length whereas I normally hit a driver that's cut down an inch.

The clubs will be a particular boon, I suspect, to those of us with slower swing speeds. We get no trampoline effect off a standard club face, so the thinner face on the PowerBilt line should give us a little extra "oomph" where it counts.

Email ThisBlogThis!Share to TwitterShare to FacebookShare to Pinterest
Labels: clubs

America’s oldest golf club celebrates its 120th anniversary today, Friday, November 14, 2008. I've enjoyed the course many times and would like to add my felicitations to the chorus of congratulatory messages I'm sure they are receiving. 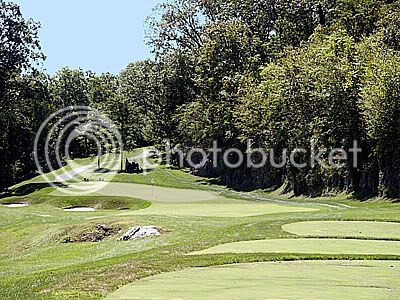 The Saint Andrew’s Golf Club was founded when Scottish sportsman John Reid gathered his friends at a pasture in Yonkers, New York, on February 22, 1888, for what became the first official round of golf in the United States. Armed with a handful of clubs and balls imported from his homeland (and perhaps a wee dram to fight the February chill?) Reid roughed out a three-hole course and thus made history in the rolling hills of Westchester.

Reid and his buddies dubbed themselves “The Apple Tree Gang” to memorialize the tree located at the subsequent apple orchard course site where the gentlemen hung their coats and wicker decanters of whisky. A few months later, on November 14, 1888 at a formal meeting at Reid’s home, The Saint Andrew’s Golf Club was founded.

After a re-location or two, Reid’s legacy lives on at The Saint Andrew’s Golf Club in Hastings-on-Hudson, New York, which claims with some great justification to being America’s oldest enduring golf club.

“The finest thing The Saint Andrew’s Golf Club did in starting the game of golf was...that they started it right, with the right traditions,” said legendary champion Bobby Jones.

Saint Andrew’s has a rich history, including it's role as a founding member of the United States Golf Association (USGA) in December 1894. The club also hosted the first unofficial U.S. Amateur as well as the first “open” championship.

A downhill lie can be a bugger, especially when you need to hit a delicate approach. It’s a common problem where I play most of my golf, in Westchester County, where golf courses are noted for having undulating (or worse) fairways and you almost never have a level lie. 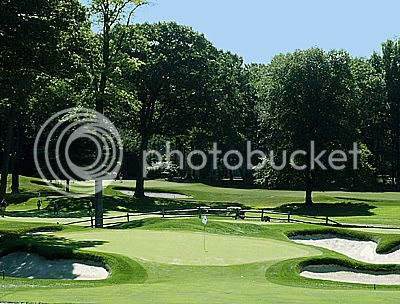 For help, I went to Bobby Heins, long-time head professional at Old Oaks Country Club in Purchase, NY, and long-time star of the Met PGA Secion. Bobby took me out to its fifteenth hole, where the postage-stamp sized green is surrounded by bunkers, which demands a high, soft approach shot. Unfortunately, you have to hit that shot standing downhill.

The key is to not believe everything you read, according to Heins. “Most people have read the books, so they put the ball back in their stance,” he said. “That causes the ball to fly low and screws up their distance. Or they play it normal and the instinct is to try and get your balance back. Because the ground is higher behind the ball, they hit fat or they skull it. I see it every day.”

The solution? “Play the ball just slightly back of normal, put your weight on the front foot—maybe sixty percent—and elongate the bottom of the swing while turning around the left leg. The last thing you want to do is lean back and try to help it into the air.”

I knew there had to be more to it. “The usual tendency will be for the ball to go a little right off the downhill lie,” he added. “So aim a little left.”

After Heins floated several towering shots that landed softly in the middle of the green 130 yards away, I asked him for a single key. “Your club head should follow the slope,” he answered, “And keep the club down through impact.”

That was two keys, but I let him ride.

Dave Donelson, author of Heart of Diamonds a romantic thriller about blood diamonds in the Congo
Posted by Dave Donelson at 3:10 PM No comments: