Such A Deal! At Putnam National

Be one of the first 50 people to sign up for a 2012 Season Pass at Putnam National Golf Club, and enjoy unlimited golf for only $299. Putnam National, the New York, daily-fee, 18-hole championship golf course owned by Putnam County and operated by RDC Golf Group, offers a picturesque landscape of rolling hills, expansive fairways and undulating greens. To enjoy Hudson Valley’s great public golf value, call (845) 628-4200.

“I have been in this business for 15 years, and I have never seen a deal this good,” says Putnam National Head Golf Professional David Patrone.

I must confess I've been around even longer, and it looks pretty good to me, too.

In addition to writing about golf, Dave Donelson distills the experiences of hundreds of entrepreneurs into practical advice for small business owners and managers in the Dynamic Manager's Guides, a series of how-to books about marketing and advertising, sales techniques, motivating personnel, financial management, and business strategy.
Posted by Dave Donelson at 11:18 AM No comments:

Only The Shadow Knows How To Kill Your Slice 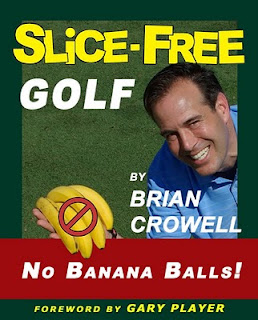 Is that old banana ball still ruining your life on the course? Check out this drill from Brian Crowell's Slice-Free Golf. In this quick video, Brian shows you how to use your own shadow in a drill to help keep the ball in the short grass.

Slice-Free Golf is the culmination of Brian's years of studying golf swings that go wrong by going right. It's full of swing tips and drills to help you create a sweet, penetrating draw. You can learn more at www.slicefreegolf.com and you can get the book from your favorite bookseller--and ebooks are available too.

I had the pleasure of working with Brian on this book and can honestly say I learned more about my swing during that process than I have in nearly 50 years on the links.

In addition to writing about golf, Dave Donelson distills the experiences of hundreds of entrepreneurs into practical advice for small business owners and managers in the Dynamic Manager's Guides, a series of how-to books about marketing and advertising, sales techniques, motivating personnel, financial management, and business strategy.
Posted by Dave Donelson at 6:00 AM No comments:

Golf legend Billy Casper will entertain members at Hampshire Country Club on Saturday, September 24 from 8:30 a.m. to 1 p.m. Casper will participate in a Q&A at a member breakfast, provide swing and putting tips, sign autographs and take photos with Hampshire members. The Masters and two-time U.S. Open champion with 51 PGA TOUR victories has close ties to Westchester County, having won his first major, the 1959 U.S. Open, at Winged Foot.

“Coming to Mamaroneck brings back wonderful memories for me,” says Casper, a member of the PGA and World Golf Hall of Fame. “I look forward to seeing everyone and making new friends; sharing tales and tips with golfers who love this great game is an honor.”

“Billy Casper’s unbelievable career, affection for the game and genial personality will make memorable experiences for our members,” says Steve Till, General Manager of Hampshire.

Overlooking Long Island Sound and only 30 minutes from Manhattan, the 116-acre Hampshire Country Club was organized in 1944. The golf course was designed by Devereux Emmett and built in 1927. It was fully renovated in 2004 by architect Stephen Kay to an 18-hole, 6,326-yard, par-71 layout with small, elevated greens and narrow, tree-lined fairways.

Redesigned in 2006, the expansive, stylish and handsomely-appointed clubhouse is home to both casual and upscale dining options. The restaurant, café, banquet area, outdoor patio and swimming pool feature expansive views of the Sound.

In addition to writing about golf, Dave Donelson distills the experiences of hundreds of entrepreneurs into practical advice for small business owners and managers in the Dynamic Manager's Guides, a series of how-to books about marketing and advertising, sales techniques, motivating personnel, financial management, and business strategy.
Posted by Dave Donelson at 6:52 AM No comments:

My Numbers Show The Power Of Club Fitting

Distance? You want distance? Get yourself to a competent club fitter immediately. I spent a couple of hours on the fitting tee with Steve Kurnit at DD Custom Golf, a new club fitting service operating at Fairview Golf Center in Elmsford, yesterday and saw some numbers that made my jaw drop. How about another 20 yards on my drives and ten more yards with my irons? Those numbers aren't to be sneezed at.

Steve started with a complete analysis of the clubs in my bag today. FYI, my driver is about five years old--and I was fitted for it at the time by a good, experienced club fitter. My irons have been around for three years and were fitted to me by the company rep, so these weren't off-the-rack junk either. I've also not been unhappy with the results I was getting--at least until Steve took me to the top of the mountain and showed me what kinds of shots I could hit.

My current driver distance is about average for a slightly better than mediocre player: according to the monitor, I carry it 226 yards and it runs out to a total distance of 254 yards. On this day, at least, I also hit it only about a yard off line. Then Steve started tinkering (mostly switching shafts) until he put one in my hands that carried 243 yards and produced total distance of 273 yards--with just a slight increase in distance off the center line. Maybe it's not tour length, but it's longer than I ever expected to hit the ball.

Think about these numbers for a minute. If I'm playing a 450-yard par four now, it takes a 250-yard tee shot followed by a hybrid or even fairway wood to reach the green in regulation. If I arm myself with clubs made to Steve's specs, I'll be hitting a seven or eight iron into that green. Gee, you think my scores might go down?

BTW, I interviewed Steve not long after he opened shop in Elmsford. He explained the procedures he follows in an earlier post.

In addition to writing about golf, Dave Donelson distills the experiences of hundreds of entrepreneurs into practical advice for small business owners and managers in the Dynamic Manager's Guides, a series of how-to books about marketing and advertising, sales techniques, motivating personnel, financial management, and business strategy.
Posted by Dave Donelson at 12:14 PM No comments:

In an unprecedented achievement, the Westchester chapter of the EWGA advanced not one, not two, but seven golfers onto the EWGA Championship, the largest women’s amateur golf competition in the world. The chapter is sending more winners to the national championship than any other chapter in the country.

They all qualify to compete in the 16th Annual Championship Finals, a 36-hole event to be held in Palm Desert, California, Oct. 20th and 21st. They will join the qualifying players from the 15 Semi-Final Championship events around the country.

“Of course it’s an exciting year for our chapter to have an unprecedented number of competitors who have succeeded at the northeast regional level, moving on to nationals in Palm Desert, California, said Chapter President and winner, Sherry Bruck. “The important thing to note is that we are all working women who just share a love of golf. EWGA encourages women of all skill levels to play and gives them an opportunity to learn, connect and grow with golf.” More than 200 women who make up the Westchester chapter of EWGA, the only all-inclusive female golf organization in the Hudson Valley.

Each of the Westchester seven are already champions, having competed and won in the Westchester Chapter Championship (one of 120 chapters nationwide) and then having won at the Metro Northeast Region level which is comprised of eight chapters. There are fifteen EWGA regions in the country.

Since its founding in 1991 as the Executive Women’s Golf Association, the EWGA has touched the lives of more than 100,000 women by connecting them to learn, play, and enjoy golf for business and fun. For more information about the association and its membership, visit www.EWGAwestchester.com

In addition to writing about golf, Dave Donelson distills the experiences of hundreds of entrepreneurs into practical advice for small business owners and managers in the Dynamic Manager's Guides, a series of how-to books about marketing and advertising, sales techniques, motivating personnel, financial management, and business strategy.
Posted by Dave Donelson at 9:03 AM No comments: