Golf Loses One Of The Good Guys

Golf lost one of the really good guys recently when Gene Borek passed away after a seven year battle with cancer.

I first met Gene when I interviewed him about Metropolis, the club in White Plains, NY, where he was head pro for 25 years. In that and every subsequent conversation, he was accommodating, amusing, and as knowledgeable about the game as anyone I've ever met. Not surprising, either, considering Gene's record as one of the most accomplished club pro competitors of our time.

As would be expected from a player of that caliber, Gene was a force to be reckoned with in local competitions. He won the Met PGA Championship three times, was twice Met Player of the Year, won three Long Island PGA Championships, two Long Island Open titles and two Westchester PGA titles. His list of honors includes membership in four halls of fame (Met PGA, Westchester Sports, Yonkers and Metropolis), being named Met PGA Professional of the year in 1972, Met PGA Teacher of the Year in 1996, and the 2003 recipient of the Met PGA Bill Strausbaugh Award for Club Relations and Mentoring.

"Once in a great while an organization is fortunate enough to have a true treasure in their ranks. Metropolis had one in Gene Borek for over 25 years and we will miss him enormously."

Dave Donelson, author of Heart of Diamonds a romantic thriller about blood diamonds in the Congo
Posted by Dave Donelson at 4:34 PM No comments: 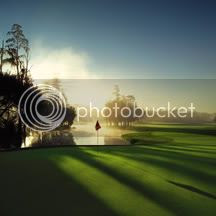 Anyone who says Florida golf is flat and water-bound hasn’t played at Innisbrook, home of four fine courses on the Gulf Coast near Tampa. Both the Copperhead, the 7,340-yard (from the tips) home of the PGA Tour’s PODS Championship, and the newly-renovated Island Course, with a tight 7,310 yards, have elevation changes as dramatic as any you’ll find at your favorite course—-and there’s nary a palm tree in sight. Instead, fairways are sharply and picturesquely defined with cedars and pines with plenty of Spanish moss to give them a Carolinas feel.

Both courses, as well as the North and South Highland tracks, have lots of water and sand, though, which keep them honest and make you earn your pars. The Island Course has all new greens and several new tees, the result of a $1.7 million renovation that started the day after resort owner Sheila Johnson closed on her purchase of the property in 2007. With tighter fairways, water on nine holes, and some dramatic doglegs, it’s actually a tougher course than the Copperhead, as reflected in the 73.5 rating/140 slope from the back (Green) tees.

The renovation of the Island Course is the first step in Johnson’s plans to revitalize the property. The resort’s first full-service 12,000-square-foot spa is scheduled to open in 2008 along with a state-of-the-art fitness area. There is no central hotel-style lodging facility at Innisbrook—-you stay in roomy, comfortable low-rise condos scattered around the 900-acre resort—-and a remarkably responsive shuttle takes you anywhere you want to go on the property. There are four restaurants, 11 Har-tru tennis courts, a nature preserve, and six pools, including the water-park-style Loch Ness Pool.

Email ThisBlogThis!Share to TwitterShare to FacebookShare to Pinterest
Labels: Florida

Louise Suggs, one of the founders of the LPGA in 1950 and the first woman inducted into the Golf Hall of Fame, will be recognized for her achievements by the Metropolitan Golf Writers Association at their 58th National Awards Dinner on Tuesday, June 16, 2009 at the Hyatt Regency Greenwich in Old Greenwich, CT. Suggs will receive the Gold Tee Award, the MGWA’s highest honor.

Suggs has one of the finest career records in golf--men's or women's--or in any other sport, as far as that goes. She racked up 58 professional victories including eleven majors. She was a dominant force in the U.S. Women's Open, competing 29 times and securing more top‐five (14 times) and top‐10 (19 times) finishes than anyone in the championship’s history. In the 1949 U.S. Women’s Open she beat defending champion Babe Zaharias by 14 strokes, a victory margin that remains a championship record.

In 1966, Suggs became the first woman to be elected to the Georgia Athletic Hall of Fame. In 2007, she was honored with the USGA’s Bob Jones Award, bestowed on an individual in recognition of their distinguished sportsmanship in golf. In 2008, she was honored by the Golf Writers Association of America with the William D. Richardson Award for her consistent and outstanding contributions to golf.

The MGWA’s National Awards Dinner is the largest and longest-running golf dinner held annually in the U.S. It's supported by all of golf’s governing bodies--the USGA, PGA of America, the LPGA, PGA TOUR and Champions Tour—-and some 700 industry leaders and local golfers attend. Proceeds from the dinner go to the Metropolitan (New York) area scholarship programs and the MGA Foundation. More than $950,000 has been raised over the years for charitable endeavors.

For advance table and ticket sales reservations or additional information, please contact Kate Keller at (914) 347‐4653 or kkeller@mgagolf.org. Tickets also may be obtained online at www.metgolfwriters.org.


Dave Donelson, author of Heart of Diamonds a romantic thriller about blood diamonds in the Congo
Posted by Dave Donelson at 5:12 PM No comments: