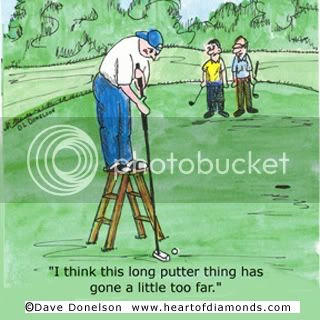 Dave Donelson, author of Heart of Diamonds a romantic thriller about blood diamonds in the Congo
Posted by Dave Donelson at 3:46 PM No comments:

The Hardest Shot In Golf?

One of the worst feelings in golf is the one you get after cracking a big drive off the tee only to watch your ball trickle into a fairway bunker. "Who put that #&@$% thing there?" is about the nicest thing you'll say when it happens.

When I told Heath Wassem I wanted him to demonstrate how to make a long bunker shot, he said with a laugh, “Oh, the hardest shot in golf!” Wassem is the head pro at Fenway Golf Club in Scarsdale, NY, and a former Westchester Golf Association Player of the Year. I figured if anybody could handle it, he could.

“The key to this shot is, don’t land here in the first place,” he said cheerfully while standing seventy-five yards from the green in one of the dozens of serpentine bunkers that challenge golfers at Fenway. I told him that advice wasn’t helpful.

“You have to contact the ball first before the sand, so you get it to the green,” he answered more seriously. I noted that this is absolutely opposite to what you’re supposed to do in a green-side bunker and he agreed. He choked up a full hand-width from the end of the club and said, “Play the ball back in your stance, grip down, and take a little extra club so you can take a smoother swing.”

I’ve heard that smooth swing mantra before. It’s hard to do when you’re standing in kitty litter and your buddies are snickering from the sidelines because they know you don’t have a clue how hard to hit the ball to make it reach the green without sailing over it.

Wassem didn’t have that problem, of course. Every one of his long bunker shots landed on the green and bounced toward the hole like he’d just tossed it underhanded instead of hitting it with a golf club. His key? “Aim at the equator of the golf ball” so you hit the ball first, he replied.

Dave Donelson, author of Heart of Diamonds a romantic thriller about blood diamonds in the Congo
Posted by Dave Donelson at 3:19 PM No comments: