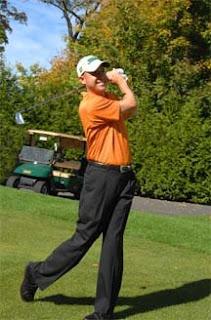 Rob Labritz has been crowned “Player of the Year” by the ultra-competitive Metropolitan Section of the PGA. Labritz, the Director of Golf at Bedford, NY's GlenArbor Golf Club won the singular honor with a stellar season of competition against a group of what are arguably the strongest group of club pros in the country's 41 PGA Sections.

Labritz racked up victories at the New York State Open at Bethpage Black, won the US Open Local Qualifying Round, and the Metropolitan Head Professional Championship, and had top finishes at the Metropolitan Open (third place) and the New England Open (fifth place). He clinched the title with a solo second place finish in the Treiber Memorial.

“This win is a product of hard work and dedication. I’ve been working for it all year long. Day after day, I spent countless hours at GlenArbor’s Short Game Center practicing every possible shot from within 125 yards of the pin, chipping and putting. I am very fortunate to have access to such incredible facilities.”

Labritz and the GlenArbor Short Game Center was featured in an article I wrote a couple of years ago for Westchester Magazine.

Labritz was also named 2008 Westchester PGA Player of the Year, earning this title for the third time in six years.

Dave Donelson, author of Heart of Diamonds a romantic thriller about blood diamonds in the Congo
Posted by Dave Donelson at 3:16 PM No comments:

Email ThisBlogThis!Share to TwitterShare to FacebookShare to Pinterest
Labels: PGA

A Reason To Go Back To School

Fordham University in Westchester is tempting me to go back to school with "CONQUERING THE COURSE: Maximize Your Business and Golf Performance," a course offered through their Executive Education Program during the fall semester. Patrick Montana, Ph.D., a certified master golf teaching professional and author of 27 books in the fields of management and marketing, is the instructor.

Montana has served as a visiting professor of management at Fordham's Graduate School of Business Administration. His books include Conquering the Course: Nine Steps to Manage Your Business and Golf Expectations (John Wiley) and Management (Barron's).

"There are many similarities in management and golf, as well as in teaching management and golf," said Montana. "Both require strategic thinking, planning, execution, control, evaluation and feedback. Given golf's popularity and global reach as well as its multibillion dollar market, we are constantly seeking ways to nurture this vibrant sport and make it and our business more efficient and effective."

Now, if he could just manage my putting stroke....

Dave Donelson, author of Heart of Diamonds a romantic thriller about blood diamonds in the Congo
Posted by Dave Donelson at 6:00 AM 1 comment: