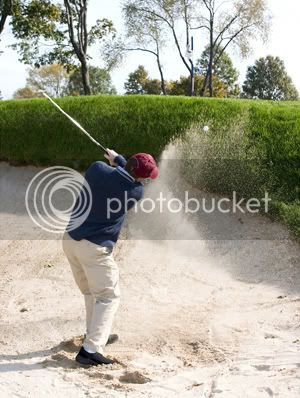 I don't think I'm getting any shorter, but bunkers seem to be getting deeper. Since I spend about as much time in the sand as a feline with bladder control issues, I needed some help this season.

I dragged Nelson Long with me to the third hole at Century Country Club in Purchase, NY, where he is head professional (although he spends his winters as head pro at Tryall Golf Club in Jamaica, the dog). I pointed into the deepest of the two bottomless pits of despair they call bunkers next to that green and asked him what the heck I was supposed to do if my ball landed in there.

“You’re going to have to use a lot of force to go a short distance,” he replied in his native Virginia drawl. “So you have to sell yourself on swinging hard.” How hard? “It wouldn’t be uncommon for me to swing at this shot pretty much like I’m hitting a full seven or nine iron. Further back, I might go after it as much as I would a driver.”

Just hitting it hard can’t be all there is to it. What else? “Start with the club face open to the sky and keep it open to the sky,” he answered, smiling innocently. He then reminded me to hit the sand behind the ball, not the ball itself. Anything else? “Play the ball off your left heel, and keep your weight more on the front foot. The lower body remains in its starting position, kind of like hitting a bunt in baseball. The backswing is an equal combination of shoulder, arms, and wrist. Then, coming down, you kind of just turn through the shot”

“I rely on at least a three-quarter or full backswing,” he added. “A short backswing will get you into trouble. Sam Snead used to say he was always looking for an opponent with a short, quick backswing and a fat wallet.” Except for the fat wallet, it sounds just like me.

Long then blasted six beauties out of the sand, each one of which landed neatly on the green far above his head. He made this hard shot look easy, so I asked him for one key to remember. “Continue through the shot,” he said.

A Heavy Concept In Putting

Stephen Boccieri’s aha! moment was 42 years in the making. He started playing golf at the age of eight and spent that long looking for the perfect putter, which he says he found in 2003 and named the Heavy Putter. Not long after his discovery, the now-55-year-old South Salem engineer brought the product to market, selling over 100,000 of them in the last few years.

The Heavy Putter is, well, a heavy putter. It weighs 900 grams (almost two pounds), which makes it about twice as heavy as a conventional putter. The concept, according to Boccierei, is that the extra weight creates consistency, producing a smoother stroke that’s easier to keep on line. I first tried the club at the PGA Show in Orlando last year, and was surprised by how natural it felt.

Boccieri has always been a golf fanatic, but he spent the first 25 years of his professional life as an engineer at Stone & Webster specializing in engineering mechanics. His final position was as a consultant at the Indian Point nuclear power plant, which he says, “was a little nerve-wracking when New York Power Authority owned it.”

In 1994, he started using his engineering skills to analyze golf clubs. Working in his basement (isn’t that where all the great inventors hang out?), he developed a device to measure shaft dynamics, one of the most esoteric facets of golf club design. He figured out that putting weight into the grip of an extra-long shaft like those used by long-drive contestants would make the club more manageable, an idea that would come in handy later.

Of course, Boccieri constantly tinkered with his own clubs. One day in 2003, he added extra weight to his putter head to see what would happen. The result almost snapped his wrist. “It was like swinging a bowling ball on the end of a rope,” he says. Serendipitously, he slipped one of the driver weights he’d been using on long-drive clubs into grip end of the shaft of his putter. “It was delightful. It was like the putter and my arm were one piece.”

The company soon moved out of Boccieri’s basement and set up corporate offices, warehousing, and a custom club shop in Ridgefield, CT. Today, they manufacture most of their product in the Far East, but build about 200 custom clubs in Ridgefield every week. Boccierei did an infomercial in 2006 that was a big success and ran a $750,000 print campaign in the major golf magazines last year.

Acceptance by PGA Tour players is slow to come, Boccieri admits, mainly because their lucrative endorsement contracts prohibit them from using another company’s clubs. That may change, though, as the Heavy Putter scores more wins. Troy Matteson won the PGA Tour's Frys.com Open in 2006 and ran off an impressive string of five Top-10 tournament finishes to rank 36th on the official money list after switching to the Heavy Putter.

Dave Donelson, author of Heart of Diamonds a romantic thriller about blood diamonds in the Congo
Posted by Dave Donelson at 5:00 AM No comments:

Email ThisBlogThis!Share to TwitterShare to FacebookShare to Pinterest
Labels: clubs 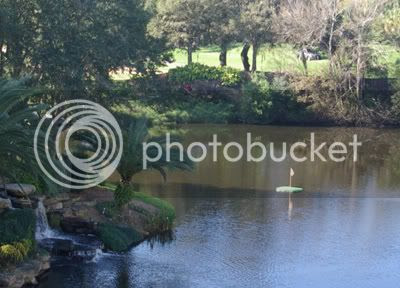 You know you’re at TPC Sawgrass when you look out your hotel room window and see the miniature island green in the lagoon. It’s not the real thing, but it might as well be, since you have just about as much chance of landing your ball there as you do on the real one at the Players Stadium Course, one of five courses at the Sawgrass Marriott Resort totaling 99 holes of fine golf in Ponte Vedre, Florida.

There are 18 holes on the Players Stadium Course, home of the Players Championship since 1982, but the 17th hole generates 99% of the excitement. It’s only 128 yards—the pros play about the same distance but from a slightly different angle—but the tee shot is like trying to land a ball on half of a tennis court. When the swirling winds come up, it’s more like trying to hit a ping pong table at the other end of a football field. Players lose 120,000 balls in the lake surrounding the green every year. Maybe that’s why it’s known as the most frightening hole in golf. 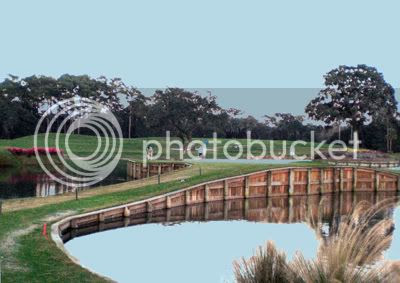 The Marriott Sawgrass Resort provides all the amenities a tired, hungry golfer could want. There are five restaurants on the property, including the Augustine Grille, where you can treat your homesick palate to a serving of Hudson Valley foie gras before tearing into a fine steak. The 25,000 square-foot spa is the place to go after your round for a soak in the whirlpool or the Sawgrass Grand Slam, which includes a hydro and color therapy bath, a deep cleansing and exfoliation, and, for the grand finale, a full body massage.

Sawgrass Marriott Resort & Spa
Ponte Vedre Beach
800-457-4653
www.sawgrassmarriott.com
Nearest airport: Jacksonville (35 minutes)
Golf package: $469 includes room and breakfast, one round on Players Stadium Course for one golfer, forecaddie and other amenities. Note, you must be a guest at the Resort to play the Players Stadium Course.

Email ThisBlogThis!Share to TwitterShare to FacebookShare to Pinterest
Labels: Florida 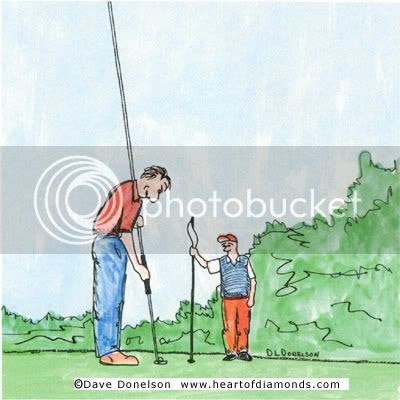 Dave Donelson, author of Heart of Diamonds a romantic thriller about blood diamonds in the Congo
Posted by Dave Donelson at 8:47 AM No comments:

Start Your Season at the Lower Hudson Golf Show

Don't miss the 5th Annual Lower Hudson Valley Golf Show at the Westchester County Center in White Plains, N.Y., on Saturday & Sunday, March 14 and 15. The organizers, which include all the major golf groups in the area, promise golfers the chance to participate in numerous equipment and instruction demonstrations.

Get there early so you'll have a chance to spend plenty of time at the big club demo area where you can test the newest clubs from Mizuno, Cleveland, Bridgestone, Titleist/Cobra, Nike, and Srixon.

The MGA is sponsoring the “Let’s Talk Golf” stage, featuring talks throughout the day on topics including the Rules of Golf and instruction tips from PGA Professionals like "How To Create A Draw" and "Slice Free Golf."

Another big draw at the show is the multitude of places to play, including destinations from across the Hudson to across the Atlantic. There will be numerous drawings for prizes ranging from golf clubs to a vacation for two to Ireland.

The show is a great way to start your golf season in the Hudson Valley.

Dave Donelson, author of Heart of Diamonds a romantic thriller about blood diamonds in the Congo
Posted by Dave Donelson at 6:22 AM No comments: