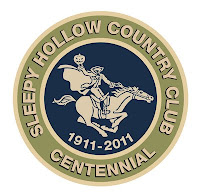 Sleepy Hollow Country Club celebrates its 100th anniversary today. The club was founded by the nation's most prominent business leaders at the pinnacle of America's "Gilded Age," opening officially on May 20, 1911.

Sleepy Hollow will acknowledge its centennial with various activities, but top of the list is the Metropolitan Open, which will be played at the club for the first time since the tournament began in 1905. The Met Open is the MGA's premier event and one of the most prestigious tournaments in the nation. The championship title has been held by all-time greats of the game including Gene Sarazen, Byron Nelson, Walter Hagen, Henry Picard, Tommy Armour, Paul Runyan, Craig Wood, and Claude Harmon. Bob Rittberger of Garden City CC is the defending champion for the 54-hole event to be held August 23-25 at Sleepy Hollow. 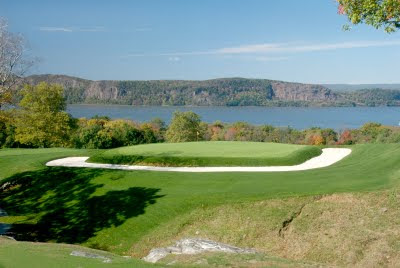 They will play on the only course in Westchester designed by Charles B. Macdonald. Over the years, the course has been changed for various reasons, but a major restoration was undertaken in 2007 under the architect's pen of Gil Hanse. The goal was not to rebuild Macdonald's original layout (which would have been impractical given all the changes the course has endured over the years) but to recreate a course blending Macdonald's concepts with the demands of the modern game. The results are generally spectacular.

When Sleepy Hollow opened in 1911, there were 600 members and a long waiting list. The founding members are a Who's Who of the business community of the day including John Jacob Astor (who died a year later on the Titanic), William Rockefeller (brother of John D. Rockefeller), and Frank Vanderlip (President of the National City Bank of New York, the forerunner of today's CitiGroup). Vanderlip was the creator of the club, which he founded on property he bought from Rockefeller, who had himself purchased it from Margaret Louisa Vanderbilt Shepard, a granddaughter of Cornelius Vanderbilt. 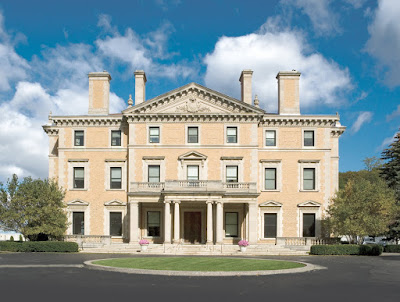 The Sleepy Hollow clubhouse is as magnificent as the golf course. It was completed in 1895 at a cost of $850,000--a huge sum for the time--and retains today the original character and features of the design by architects McKim, Mead, and White. The mansion includes a ballroom, library, formal dining room, and 18 guest rooms as well as the golf pro shop and locker rooms. An original Tiffany window lights its grand staircase and the view of the Hudson River may well be the finest in the county. 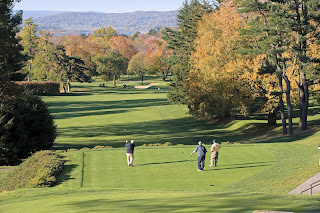 Golf is not the only activity offered at Sleepy Hollow. A spectacular European-style stable is home to some 50 horses and is the centerpiece of the club's extensive equestrian program. There are also two indoor and two outdoor riding rings. Members can also indulge in swimming, tennis, skeet and trap shooting, and squash. Golf is king, however, with an additional nine-hole course and state-of-the-art instruction and practice facility also available.

In addition to writing about golf, Dave Donelson distills the experiences of hundreds of entrepreneurs into practical advice for small business owners and managers in the Dynamic Manager's Guides, a series of how-to books about marketing and advertising, sales techniques, hiring, firing, and motivating personnel, financial management, and business strategy.
Posted by Dave Donelson at 1:00 AM No comments:

The End Of The Amateur In Golf

Could two amateur golfers beat two of the world's greatest professionals? Once upon a time, they might. Mark Frost tells the story of just such a contest in his account of The Match: The Day The Game Of Golf Changed Forever. But this isn't a fairy tale. It is instead a can't-put-it-down true account of a high-stakes game played in 1956 on one of golf's most spectacular courses by four of the game's legendary competitors.

Ben Hogan and Byron Nelson are the pros. They have fourteen major championships between them. Coming from the same caddie yard, the once-close competitors haven't spoken in years--but they teamed up to face the two leading amateurs of the day, Harvie Ward and Ken Venturi. Both of these young men competed at the highest levels of the game in the hallowed tradition of Bobby Jones. As a match-play team, they had never been defeated. The venue for the match? Storied Cypress Point, whose fairways follow craggy cliffs and rocky promontories swept by the winds of the Pacific while the ocean crashes below.

Frost lays out the play stroke by stroke, pacing the narrative with revealing histories of the players and other notables inolved in the day. He puts the game into context, pointing out that this day marked the end of the amateur era and the ascendance of the professional. While the match itself is compelling, the after-stories make fascinating reading, too, especially for those of us interested in the history of our great game.

In addition to writing about golf, Dave Donelson distills the experiences of hundreds of entrepreneurs into practical advice for small business owners and managers in the Dynamic Manager's Guides, a series of how-to books about marketing and advertising, sales techniques, hiring, firing, and motivating personnel, financial management, and business strategy.
Posted by Dave Donelson at 8:44 AM 1 comment:

New Jersey and New York charities will join in TICKETS Fore CHARITY as part of the promotional effort of The Barclays, the first event in the PGA TOUR Playoffs for the FedExCup, which will feature 125 of the top players on TOUR, Aug. 23-28 at Plainfield Country Club in Edison, N.J.

Through TICKETS Fore CHARITY, The Barclays gives 501(c)(3) organizations the opportunity to promote tournament tickets to benefit their organization. Best of all, 100 percent of the net proceeds from the ticket sales – net proceeds exclude tax or processing fees – go to charity: 75 percent to the charity promoting the tickets; and 25 percent to The First Tee of Metropolitan New York. The First Tee is an initiative of the World Golf Foundation aimed at positively impacting the lives of young people by providing learning facilities and education programs that promote character development and life-enhancing values through the game of golf.

“This is an incredible opportunity to raise unlimited funds for the participating charity and there are absolutely no costs to the organization,” said The Barclays Executive Director Peter Mele. “Fans will get to witness the very best the PGA TOUR has to offer and generate revenue for charities in New York and New Jersey during a time when these organizations need our help more than ever. We’d like to invite charities throughout the area to join us in enhancing and enriching our local communities by participating in TICKETS Fore CHARITY.”

The ticket available through TICKETS Fore CHARITY is a weekly grounds ticket available for just $50, normally priced at $100. This is a grounds ticket for each day of the tournament from Tuesday August 23-Sunday August 28. Tickets can now be purchased on behalf of your charity of choice by visiting www.buytfc.com. Non-profit organizations interested in participating in the program should contact Dan Chelel at The Barclays tournament office at danielchelel@pgatourhq.com or 201-444-5356.

The PGA TOUR, its players and tournaments support more than 3,000 charities. These local and national organizations work in a range of areas affecting the lives of millions in the communities where we live and play. In 2010, The Barclays donated $1 million to local charities, bringing the total amount raised since 1967 to more than $37 million.

The Barclays has been a part of the PGA TOUR schedule since 1967 when Jack Nicklaus won the inaugural event at Westchester Country Club. Since that time, some of the greatest players in the game have earned the title including World Golf Hall of Famers Arnold Palmer, Johnny Miller, Raymond Floyd, Seve Ballesteros, Hale Irwin, Curtis Strange and the new defending champion, Matt Kuchar, 2010 winner of The Barclays. Many of the world’s current top players have won the event as well, including two-time champions Ernie Els and Sergio Garcia, and four-time champion Vijay Singh. As the first of four playoff events, The Barclays plays a leading role in the FedExCup, the season-long competition that is the centerpiece of the PGA TOUR season. In 2011, The Barclays will be held at Plainfield Country Club in Edison New Jersey, on August 23-28. For tournament information visit www.thebarclaysgolf.com.

In addition to writing about golf, Dave Donelson distills the experiences of hundreds of entrepreneurs into practical advice for small business owners and managers in the Dynamic Manager's Guides, a series of how-to books about marketing and advertising, sales techniques, hiring, firing, and motivating personnel, financial management, and business strategy.
Posted by Dave Donelson at 3:33 PM No comments: