Boccieri Golf has put its considerable weight behind the long putter movement by making all the company’s putters available with belly-length or longer shafts. Standard length Heavy Putter models include a counterweight under the grip, producing a higher balance point that promotes a smoother stroke. This back-weight is modified in belly and long putters to accommodate the increased mass of a ski-pole shaft and 21- inch or two-piece grips. 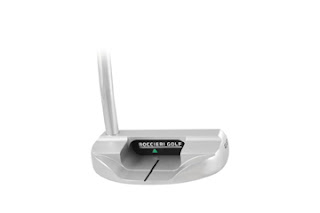 The specially-placed weight engages the body’s larger muscles for a consistent swing path, uniform pace and precise distance and directional control. Any of the multitude of Heavy Putter models can be ordered with the popular long shafts, giving the player nearly endless options in the quest for a fewer putts on the scorecard. Prices start at $199 for standard length and $259 for belly and long putters.

Posted by Dave Donelson at 2:59 PM No comments:

Some people might find observing a golf course evolve about as interesting as watching paint dry, but I've always been fascinated by the way the playing fields of the sport change over time. One that I've watched for about ten years is Salem Golf Club in North Salem, NY, a non-equity club whose owners have continued to invest in and improve a fine layout.

In the last couple of years, Salem's managing partner Joel Berman has directed an aggressive program to remodel and re-position the bunkering on nearly every hole on the course. Sight lines (and strategic shot opportunities) have been opened up through selective tree removal in several places. Amenities have been added, too, including a new short game area to go with the range and putting green, new cart paths, and two sets of junior tee markers to help bring new players into the game. The result is a challenging but playable golf course with many striking holes.

Those familiar with the course will remember the 375-yard fifth hole, an extremely tight driving hole that was sort of a push-over if you kept your tee shot in the short grass. Some of the trees that squeezed the landing area have been removed, however, opening the hole to more aggressive play off the tee. New green-side bunkers make your approach to the potato-chip green even trickier. The eighth hole, a 396-yard uphill par four, has new fairway bunkers to force accuracy off the tee and deep new bunkers left and right of the green to keep you honest on your approach. The 426-yard ninth has two new bunker complexes, one off the left side of the fairway, the other about twenty yards short of the green on the right, that turned a so-so hole into a real tester.

On the back side, the already-excellent thirteenth hole, 407 yards that require three perfect shots (including a tough putt from anywhere on the green) to have a chance at par, got a completely new concept for the ladder of bunkers that climb the hill to the steeply elevated green. Originally, they were surrounded by fescue that drooped into the sand from the uphill side, making it sometimes necessary to play back down the hill just to escape them. The new bunkers, however, have smooth grass faces and flat sand bottoms, giving the player at least a chance to blast out to the putting surface. The hole is still the best on the course, however. As head pro Charlie Poole points out, "The tee shot is intimidating, the second shot for even the better player is difficult, and the green is hard, too. The hole never lets up."

Another major change comes on the fourteenth, a 595-yard par five with a sharp dogleg left that used to require a second shot over trees or a layup leaving a 200-yard approach over water from a downhill lie. The removal of several big trees opened an alley for the aggressive, accurate shot maker to place his second shot within wedge range of the green. It's still a monster three-shot hole, but now the player has some better options. New tees on the seventeenth hole lengthen it to 372 yards and new bunkers squeeze the landing area, making it a much more challenging hole.

Salem currently has no initiation fee, no assessments and no tax on dues. Membership categories available include a special weekday-only option, which has proven popular.  The club has an active junior instruction program and children are welcome on the course--another big plus in my book.

Posted by Dave Donelson at 11:41 AM No comments: 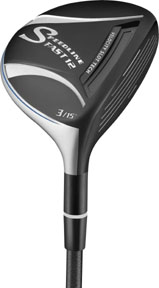 Pick up your swing speed with what Adams Golf describes as the most aerodynamically efficient golf club on the market, the Speedline Fast 12 Fairway wood.  The clubs feature Velocity Slot technology for even more ball speed, forgiveness, and better launch conditions. In the Adams tradition, they’re also easily played from all lies on both the tee and ground. The face has a super-wide sweet spot and promises to deliver a higher launch angle without impacting the spin rate.

The new Graffaloy ProLaunch Blue shaft is more aerodynamic, too. Its Speed Coat technology is designed to increase air flow attachment to lower drag. Four shaft flexes are available from lite to extra-stiff. The clubs come in standard and draw models in lofts from strong three-wood to seven wood.

Posted by Dave Donelson at 2:55 PM No comments:

Osiris Country Club in Walden, NY, has a quite pleasant split personality in a couple of different ways.
The first bifurcation occurs on the golf course itself, which is a delightful trek through two different kinds of layout. It's 6,373 yards at par 72 and was designed by Francis Duane on two distinct topographies. The front nine plays much like a golfer-friendly resort course, with flat terrain, small but moderately contoured greens, and not too much trouble you can't stay out of as long as you don't insist on hitting a driver off every tee. The biggest problem you'll face is if you hit a hook--seven of the holes on the front have OB left.

Make your birdies while you can on the front: the back nine has some teeth. As soon as you make the turn, you're in a different world. The tenth hole is a short (368-yard) dog leg right where the blind tee shot plays downhill while the second is up a steep climb. Whatever you do, keep your approach below the hole--a theme that plays throughout the back side. Both the tenth and eleventh holes have wicked greens where putting off the edge of the green carpet is entirely possible.

There aren't any gimme holes until you get to sixteen, a 546-yard par five. Even that has a funky angle for the tee shot and plenty of well-placed bunkers along the way. If long par fours are your thing, the 442-yard thirteenth hole should satisfy you. Be sure to keep your tee shot in the center of the fairway--there are bunkers on either side of the fairway exactly in the landing zone.

The signature hole on Osiris is the fifteenth, a strong dog leg left that features the only water on the course, which happens to be a picturesque pond in front of the green. Stay in the right half of the fairway off the tee or you'll be forced to lay up.

The finishing hole presents the most intimidating tee shot of the round, even though the hole, at 345 yards, isn't tough if you can keep it in the fairway. Big hitters can boom it to the top of the hill so they've got a flip wedge into the green.

The other split in the Osiris personality is part of a the growing trend of private clubs turning semi-private, which Osiris did last year. The club, which was founded in 1927, switched to semi-private due to economic pressures once before in the 1940s, but reverted to private club status in the 1950s. Given the changing demographics of the game and challenging economic conditions for private clubs today, opening the club to public play again today makes eminent sense. Given the reasonable greens fees (as low as $48), Osiris also makes a great value for the player looking for a quality golf experience.

Posted by Dave Donelson at 6:00 AM No comments: