A Golf Education At Yale

The most important club in your bag the first time you play The Course At Yale is a yardage book. In fact, I suspect it would come in handy every time you tee it up at the Charles Blair Macdonald masterpiece in New Haven, CT. Macdonald and his collaborators, Seth Raynor and Charles Banks, took full advantage of the twists and turns of the rolling topography to hide bunkers, bring sneaky water into play, and create some general confusion (if not outright panic) in the player's mind throughout the course. It all makes for great golf, but having an accurate map with precise distances in front of you is essential to scoring.

Take the third hole, a 411-yard par four with a serpentine fairway that hides the green on both your first and second shots. I misunderstood my playing partner's instruction and spent several minutes lining up my approach to the wrong "white pole" in the distance. Fortunately, I discovered my error before I fired away at the pond on the right instead of the green on the left--both hidden behind fescue-covered hills.

Or the number one handicap hole, the 437-yard fourth. The direct route to the green brings water into play--maybe. The lake on your right turns back toward the fairway at about 230 yards, but a carry of 280 will put you in the fairway dry and on the other side. There's plenty of room left, but that will leave a long, long, second shot to a green protected by four big bunkers.

The Course At Yale has remarkable features on just about every hole. The par-three ninth hole is not only 231 yards over water, but the green is about the size of California (it's 65 yards long!) and is divided by an eight-foot-deep swale right through the middle. The green on the 396-yard tenth hole is so elevated I literally walked out of my shoes trying to climb up the front after putting my approach into the bunker at the bottom. The twelfth hole is one where you'll definitely find that yardage book handy. A massive bunker stretches the width of the front of the green--except you can't see it at all from the fairway.

The finishing hole really tests your faith in your long ball. It's 621 yards, which makes it challenging enough, but both the tee shot and the second shot are basically blind! The second shot is steeply uphill to a narrow fairway, although there is an optional route to the right which leaves a long, blind third shot into the green. Two-putt birdies are tough if not impossible to achieve on this hole, but a player who puts his or her third shot in front of the green can manage a pretty easy up and down for a welcome par.

The Course At Yale, 6,749 yards from the tips, is tough but playable. The greens are huge, fast, and fun. They're full of both striking contours and subtle breaks yet eminently putt-able as long as you don't get too greedy and try to ram home those sixty-footers. Fairways are tight and twisty, but not claustrophobic, and the hazards, while plentiful, can be avoided with good tactical ball striking.

Dave Donelson, author of Heart of Diamonds a romantic thriller about blood diamonds in the Congo
Posted by Dave Donelson at 6:43 AM No comments: 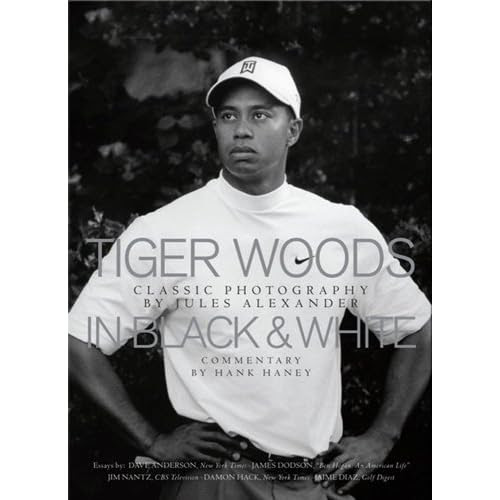 Jules Alexander sees Tiger Woods differently from you and me. His eye captures the nobility of the struggle of player against the course, the intense quest for perfection on every shot, the sheer joy of a man doing exactly what he is fated to do. You and I sense those qualities in Tiger Woods; Jules Alexander captures them on film.

His seminal work, Tiger Woods: In Black and White

, gives us an intimate look at the man in action. These aren't staged pictures of Tiger endorsing a product or posing for a golf magazine how-to article. This collection shows the man on the course, musculature perfectly defined, eyes fiercely concentrated on the target, mind fully focused on the moment.

Most of all, though, Alexander's photographs show the same quality in Tiger Woods he captured in Ben Hogan years ago. Then and now, Alexander shows us their grace.

This book makes a perfect fifty-year milestone for Alexander. He created a place for himself in the golf world in 1959 with his photographs of Hogan competing in the U.S. Open at Winged Foot. A golfer himself, Alexander brought that same expert eye to his self-assignment to put the essence of Tiger Woods on film.

He also called on friends in golf journalism to contribute some wonderful essays about Tiger, giving the book additional gravitas. As fascinating as the words of Dave Anderson, Jim Nantz, and Johnny Miller might be, however, none of them are as insightful as Alexander's photography.

For The Pure Joy Of It

2009 has been a difficult weather year for golf, but many of us are still swinging away regardless of the conditions. Yesterday's round at Anglebrook in Lincolndale, NY, proved that if you don't worry too much about your score and play the game for the pure enjoyment of it, you can have a great time regardless of the stuff falling out of the sky. Good companionship helps, which I had with Ralph Wimbish and Dan Berger. Anglebrook GM Matt Sullivan joined us for a few holes, but corporate duties called him back to his desk before things got interesting.

When we started the round, it was cold but dry. A little spitting rain started to fall as we made the turn, but hope springs eternal--especially on the golf course--so we pressed on. The snow didn't really start until the thirteenth hole and by then we were wet anyway, so what difference did it make? Besides, there were only a few more holes to play.

Sixteen at Anglebrook is a short but challenging par five. A fair poke off the tee (250 yards) puts you at the end of the fairway landing area looking downhill to the green 235 yards away. Anything much longer leaves you with a severe downhill lie in the rough, so bombers beware. But from the end of the fairway, you just gotta go for it. Aside from the bunkers, all you have to fear is fear itself, right? 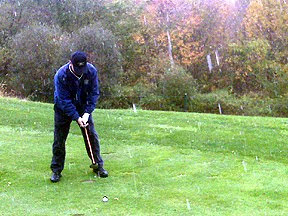 Berger couldn't resist snapping a quick pic with his cell phone and yes, that is snow pelting me as I take my stance and take dead aim at the flagstick on the sixteenth hole. My shot landed just in front of the green and would have made it easily to the putting surface (or so I told everyone within earshot) if the ground had been dry. I attributed my miss of the birdie putt to the weather, too, since at that point in the round I had no feeling in my right hand.

Did I care? Not one whit.

As Wimbish said, "We're playing golf. What do we have to complain about?"

Dave Donelson, author of Heart of Diamonds a romantic thriller about blood diamonds in the Congo
Posted by Dave Donelson at 8:27 AM 1 comment: