Precision will be the name of the game when the U.S. Open field returns to tackle the recently refurbished Lake Course at San Francisco's Olympic Club in 2012. While a great many trees were removed to open sight lines and improve turf conditions, the course remains a short (6,934 yards) but demanding track off the tee. The real defense will be the greens, though, which are small and severe.

They also played very firm when I was there not long after the course reopened after its most recent renovation. High feathery approach shots didn't hold and you even felt the firmness beneath the grass when repairing ball marks. Two more seasons of turf dressing will soften them somewhat, but it will be very interesting to see how the pros attack them without sharp-edged square grooves on their wedges.

The three finishing holes are among the best in the game. They are each distinctive and require the player to have a full arsenal of golf skills. The 16th is a lengthy par 5 (609 yards) that is virtually unreachable in two. It doglegs left and plays basically level off the tee, but the elevated green is small even by Olympic standards. It's also well-bunkered.

The 17th hole, which members play as a par five, is a 522 yard par four for the tournament. The fairway slopes left to right and the second shot is strongly uphill even from the left side of the fairway. There is no bailout area, either, and only a small alley between bunkers to roll the ball onto the green. It's only accessible from the left side of the fairway, though, so don't plan on using it.

The 18th hole isn't what you normally expect from a finishing hole on a major venue. At 347 yards, I suppose there will even be a Bubba or two who tries to drive it, but the green is about the size of a Lamborghini's hood and just about as fast, so even a flop shot in will be no guarantee of a birdie putt. Protests at the 1998 Open led the club to flatten the green somewhat in 2000, but slightly steeper contours were restored during the recent work.

Improve your golf game by watching golf on your dish satellite tv system from SatelliteDish.tv, where you can find dish tv reviews, satellite dish accessories and dish network hd receivers!
Posted by Dave Donelson at 10:22 AM No comments:

Bisconti Caps Memorable Season With Met Player Of The Year

Congratulations to Greg Bisconti for a stellar golf season capped by being named Met PGA Player of the Year. Bisconti, an assistant at St. Andrew's in Hastings-on-Hudson, NY, came on strong with wins in two of the last three events of the season to edge out Century's Frank Bensel in the point standings. Bisconti won The Treiber Memorial Tournament of Champions at Wheatley Hills Golf Club and the Assistants Fall Meeting at Round Hill, adding to a win he chalked up in September at the Assistants Tour Championship at Tamarack CC.

Winning the Met Section is quite an honor, but Bisconti performed on the national stage as well. He earned Low Club Professional at the PGA Championship in August at Hazeltine National Golf Club, putting him on the 18th green with winner Y.E. Yang for the award ceremony at the end of the tournament. He says he felt a sense of calm as he stood on the green in front of hundreds of millions of TV viewers around the world to accept his trophy. It was Bisconti's third appearance at the PGA, where he also qualified to play in 2006 and 2007.

Bisconti played the first round at Hazeltine three over, but put together a string of three birdies during the 2nd round to make the cut. Once he came to the 18th hole he had to get up and down out of a bunker from 30 yards in three strokes or less to secure his spot on the weekend at Hazeltine. He parred the hole and says it was a moment he had dreamed of forever.

In A Fog At Half Moon Bay

Playing golf in thick fog really tests your confidence in your swing, something I tried to keep in mind while playing the Old Course at the Ritz Carlton in Half Moon Bay, CA. When we stepped on the first tee, fog obliterated the view of everything beyond the forward tee box, giving us no indication of the line of the fairway or what hazards lay where. We played the first six holes in deep fog. It was a little disconcerting, but it also added some excitement to the round.

If, as I do, you believe that one of golf's greatest pleasures is the adventure of playing under challenging conditions that vary with every round, it's easy to swing away with full confidence.

Half Moon Bay is one place you can play that way, fog or not. The fairways are accommodating, the bunkering generally friendly, and the greens are large and not too severe. It is, after all, a resort course where showing the guests a good time is more important than beating their handicaps into submission. The course was built in 1973 and redesigned by Arthur Hills in 1999.

While the Old Course is a fairly unremarkable parkland track that winds through the residential neighborhood around the Ritz Carlton resort, the finishing holes are spectacular. The 17th is a 157-yard par three with the Pacific Ocean filling the vista behind the green. The 18th plays along the ocean for its full 384 yards, giving both your tee shot and approach an added element of danger. It is essential that you play the left side of the hole since an errant fade will send your ball over the cliffs to the beach far below.

I was told that the survival of this beautiful hole is very much in doubt since erosion apparently threatens to send it crumbling into the sea. A few years ago, the developers of the property built what turned out to be an illegal seawall in an effort to protect the green, but it was ordered removed after vehement protests by the Sierra Club. The bluffs continue to fall away and the hole may disappear in a few years, so schedule your round there sooner rather than later.

Dave Donelson, author of Heart of Diamonds a romantic thriller about blood diamonds in the Congo
Posted by Dave Donelson at 9:40 AM No comments:

Email ThisBlogThis!Share to TwitterShare to FacebookShare to Pinterest
Labels: Travel

Round Wrecker At The Black 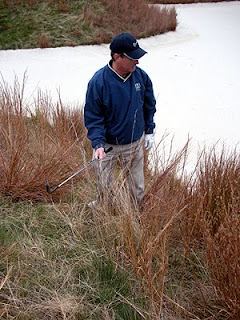 When I play a tough track like Bethpage Black, I always start out with the best of intentions. Forget distance--keep it in the fairway. Lay up anywhere you can't make it without a miracle. When you're in the rough, wedge out. Still, sometimes it only takes one hole where even the best of intentions don't count for much.

This is the eleventh at the Black. It's a 421-yard par four that I usually do fairly well on. This day, feeling cocky for parring the more difficult 10th hole, I pulled my drive hard left. Not quite a duck hook, but maybe a goose with a crooked neck. Anyway, I wasn't lucky enough to land in the bunker but rather found the ball about three feet short of it. The rough was so deep and I was so far from the fairway, I knew I couldn't get out sideways. I would take an unplayable, but the nearest drop would still have been in the ka-ka--and I couldn't drop in the bunker because that would be closer to the hole.

Finally, I took one hearty swipe to try to hit the ball into the bunker. It moved a foot closer but still in the hay. Got there in the second try though, hit to the center of the fairway with an eight iron from the sand, and eventually walked off the green with a triple.

My thanks to playing partner Tom Ralph, who was playing the Black for the first time that day and brought along his camera to memorialize the occasion.