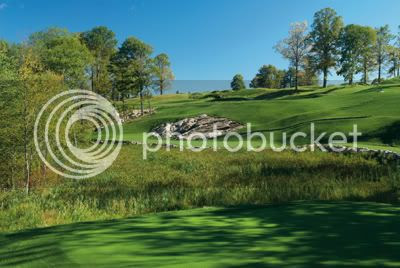 Pound Ridge Golf Club, Pete Dye’s newly-opened ball-eater, is a spectacular golf course in a place where there are many spectacular golf courses already--Westchester County, NY. His first New York course joins a pantheon of legendary tracks like Winged Foot, Quaker Ridge, Westchester Country Club, Fenway, and Century, not to mention legends-in-the-making such as Hudson National, GlenArbor, Golf Club of Purchase, Trump National, and Anglebrook. It will be interesting to see how it rates with this sophisticated golf community.

I toured Pound Ridge while it was under construction, then played it during the Grand Opening just before it went live to the public. It’s look is unlike that of any other course in the area, which is what you would expect from Pete Dye and his son, Perry, who actually deserves most of the credit for the layout. The new course was literally blasted out of Westchester granite on 172 wooded, rolling acres. Fairways are narrow and rolling, surrounded my moguls, expansive bunkers, and what seems like miles and miles of stone walls (they had to do something with all that blast debris). Rock outcroppings are everywhere, as are environmentally-protected wetlands and acres of dense woodlands. The course is visually stunning.

At 7,171 yards from the tips, it’s plenty of golf course, too, although four other sets of tees ranging down to 5,180 yards make it perfectly playable for all types of golfers. The key to enjoying the course, in fact, is choosing the right set of tees. Several holes have forced carries and obstacles like trees and rock formations that will ruin the round of the player who insists on playing the blues (6,787) when their handicap calls for the whites (6,279). That’s a common theme, of course, but Pete Dye drives the point home with a vengeance.

The 18th hole is the most controversial in that regard. From the white tees, it’s a 415-yard par four with a series of bunkers along the left leading to a pond that pinches the front of the green. Moguls line the right side the length of the hole. Two huge maples stand 130 yards from the tee in the right rough. Go forty yards back to the blue tees, though, and the hole not only becomes a more respectable 454-yarder, but those two maples now completely block the line to the fairway about 170 yards off the tee. Since they’re at least 75 feet tall, it’s almost impossible to hit a driver high enough to carry over them. A sweeping fade means you have to aim directly at the fairway bunkers on the left; setting up for a draw points you at the adjacent fairway and has to come back over the moguls in the right rough. 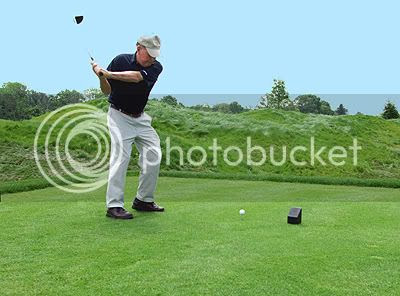 As Dye told my friend John Paul Newport of the Wall Street Journal, "Anybody dumb enough to play the hole from back there can try to work around it if they want to. There'll be some bellyaching, but who cares?"

The most interesting feature of Pound Ridge, though, is that it’s a daily fee course, not a private club. Owner Ken Wang, brother of fashion diva Vera Wang (who hits a mean driver herself, by the way) saw a need for a high-end public course in the New York metro market. He may be right, too, since Westchester County has a grand total of six public golf courses (munis, really) serving a population of nearly a million people. There are a few daily-fee courses within a hour’s drive, but none of them are even remotely in the same league. Greens fees at Pound Ridge? $235 including cart and use of practice facilities.

Watch great live golf thanks to the best satellite tv deals for cheap satellite at SatelliteDish.tv!
Posted by Dave Donelson at 6:20 AM No comments: