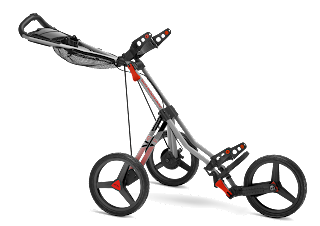 This gift may not fit in your favorite golfer's stocking, but it sure will in the back of his car. It's the  newest version of Sun Mountain’s category-changing Speed Cart® golf push cart, the V1 Sport. The cart combines the most popular features of past Speed Cart models with new colors and graphics plus it folds and unfolds easier than ever, has an improved brake system, and mag wheels. Speed Cart V1 Sport is in stores now with a suggested retail price of $199.

Additional features on the Speed Cart V1 Sport include adjustable brackets that secure a golf bag without using straps or cords, an umbrella mount that secures an open umbrella to shield you (and your clubs) from rain (or sun) and an accessories tray with a scorecard holder, drink holder and a mesh headcover tray.

Posted by Dave Donelson at 4:09 PM No comments:

Email ThisBlogThis!Share to TwitterShare to FacebookShare to Pinterest
Labels: carts

CBS Sports broadcaster Jim Nantz will receive the 2013 Metropolitan Golf Association Distinguished Service Award this week. Nantz, 54, is being recognized for his impressive charitable work, especially on behalf of golf in the Met Area. Nantz has helped organizations like the MGA Foundation and The First Tee raise millions of dollars to grow the game and provide countless opportunities for young people.

The MGA Distinguished Service Award was created in 1973, and is presented annually to a candidate who has contributed “distinguished service to golf and its related activities, consistent with the valued standards and honorable traditions of the game.” Some of its past winners include Joe Dey, Harry Cooper, David Fay, Robert Trent Jones Sr., Dave Anderson, Rees Jones, P.J. Boatwright, and Charlie Robson.

Nantz spent much of his childhood in New Jersey and started at CBS Sports in 1985. He is currently the network’s lead play-by-play announcer for NFL football and NCAA basketball, as well as the lead anchor for golf coverage. Though he currently resides in California, Nantz spent most of his accomplished career in Connecticut. His accolades include three Emmys, five National Sportscaster of the Year awards, and he’s the only person ever to call the Super Bowl, Final Four and Masters in the same year (he’s done it three times). In addition to hard work and good fortune, the sportscaster credits golf for teeing up his drive to professional success.

“Golf was a vital part of my life that opened up all kinds of avenues to me in my professional career,” says Nantz, who was introduced to the game by his father, also named Jim. He worked during summers at Battleground Country Club in Manalapan, NJ, and was recruited to play on the golf team at the University of Houston where he earned a degree in radio/television in 1981. “Golf really set the course for my life, and because of it, I feel indebted to the game.”

A longtime member at Winged Foot Golf Club and The Stanwich Club, Nantz has used his celebrity status to be a visible advocate for the game in the Met Area and beyond. In 2001, he lent his voice to the MGA Foundation’s Capital Campaign video, a valuable tool which raised $5 million. The following year, he acted as master of ceremonies at the groundbreaking for The First Tee of Metropolitan New York at Mosholu Golf Course in the Bronx and has been a consistent supporter of this national youth initiative.

“More than any other sport, golf has a heartbeat that cares about people,” Nantz says. “It’s the basic nature of the game: etiquette, kindness, playing by the rules and doing good things – golfers are people that care for other people and it’s one of the tenants of the sport to give back and be caring for others.”

Nantz continues to promote and give back to the game his dad introduced him to. His contributions and vigorous advocacy of the game will help ensure that the game and its values are passed on to the next generation, which makes Jim Nantz most deserving of the MGA’s Distinguished Service Award.

“Jim and I have been friends and partners for many years, and he is as genuine a person as you’ll find,” says MGA President Jeff Holzschuh. “His passion for the game is matched only by his commitment to giving back, and he has been a true friend to golf in the Metropolitan Area.”

The award will be presented at the 116th MGA Annual Meeting and Dinner on Wednesday, December 4 at Westchester Country Club in Harrison, NY.

Posted by Dave Donelson at 4:00 AM No comments: